The Auschwitz Jewish Center facilities include the Chevra Lomdei Mishnayot Synagogue, the adjoining Kornreich House – which today houses exhibitions and education programs – and the Kluger House, the former home of the last Jewish resident of Oświęcim, which now houses Café Bergson. The AJC also owns the site of the Great Synagogue and the Oświęcim Jewish Cemetery. 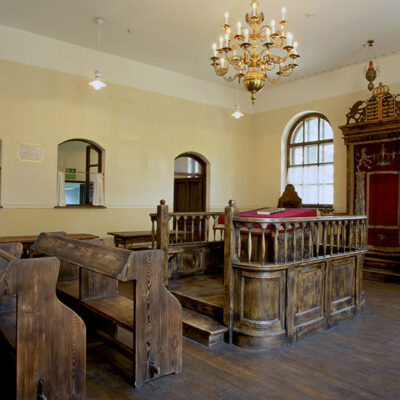 The Chevra Lomdei Mishnayot Synagogue (the Society for the Study of Mishnah – the Jewish law/legal code) is the only Jewish house of prayer in Oświęcim to survive the Holocaust. It was built circa 1913 and functioned until the Nazi occupation, when it was turned into a munitions warehouse. It reopened as a synagogue after WWII and was used for a few years by a group of survivors until the majority of them emigrated. Later, it was nationalized by the Communist regime and used as a carpet store. Following the collapse of communism, in 1998 the Synagogue became the first Jewish communal property to be returned to a Jewish community in Poland. It was returned to the Bielsko-Biała Jewish community, which then donated it to the Auschwitz Jewish Center Foundation. The fully restored synagogue reopened to the public in 2000.

Today, the Chevra Lomdei Mishnayot Synagogue has neither a rabbi nor a local congregation, but as the only Jewish house of worship near Auschwitz, it is available to visitors for prayer, reflection, b’nai mitzvot, and other celebrations.

In the home of the Kornreich family of Oświęcim (Oshpitzin in Yiddish), the Center’s Jewish Museum tells the story of almost 500 years of Jewish life in Oświęcim through photographs, documents, artifacts, testimony, and the Judaica excavated in 2004 from beneath the site of the Great Synagogue. 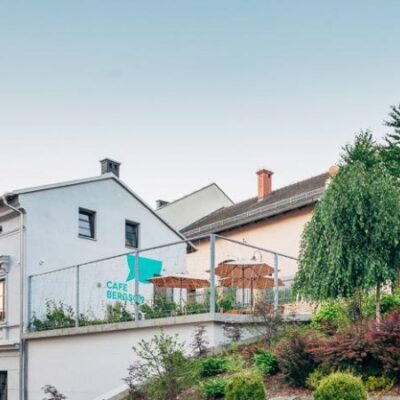 Café Bergson in the Kluger House, the home of the last Jew in Oświęcim, serves vegetarian local fare in a historic environment. Cultural events take place on a weekly basis, and traveling exhibitions are on view on the lower level.

The Great Synagogue Memorial Park, a site owned and maintained by the Auschwitz Jewish Center, was inaugurated on the 80th anniversary of the destruction of the Great Synagogue in Oświęcim by the Nazis. It is a place of memory and reflection for residents of and visitors to the town. 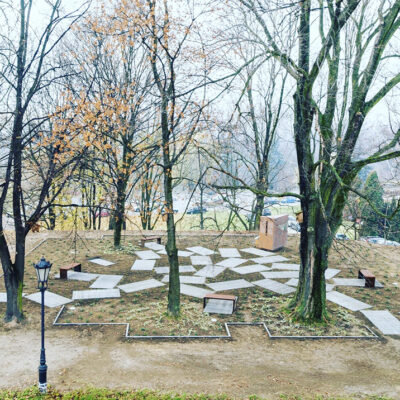 The Great Synagogue was the central Jewish house of worship from its establishment in the 1860s until World War II. This impressive building replaced the first synagogue from 1588 and stood at the heart of Oświęcim’s Jewish quarter. The largest pre-war synagogue in the town, it was famous for its ornate interior and being the first facility with electrical lighting in Oświęcim. On the night of November 29-30, 1939, the Nazis destroyed the Great Synagogue. Soon after, prisoners of Auschwitz were forced to continue the demolition until no trace of it was left.

Since 2000, the AJC has maintained the site of the Oświęcim Jewish cemetery, in which the last burial took place that same year with the death of the last remaining Jew in the town, Szymon Kluger. This was the second cemetery in the town, established in 1794 after the first was closed due to Austrian regulations. In July 1941, the cemetery was closed by the German authorities, and its contents were almost entirely destroyed. Matzevot, tombstones, were used as construction material and some ended up at the bottom of the Soła River.

In the first years after the war, the cemetery was partly restored at the urging of a handful of Jews from Oświęcim who had survived the Holocaust and returned to their hometown. There was minimal care of the cemetery between the 1960s, when the last of Oświęcim’s Jews left (though some Jews returned in the decades after), and the mid-80s, when Asher Scharf, who lived in the United States and whose ancestors were buried in the Oświęcim cemetery, initiated an extensive restoration.

Today, several groups help clean up the space within the framework of the Center’s educational projects.