Restitution Ceremonies at the Museum

In the last two decades, the Museum has hosted several restitution ceremonies to commemorate the return of Nazi-stolen paintings and other artifacts to their rightful owners.

1999: The Seamstress by Lesser Ury
In 1999, The Seamstress, painted by famed German artist Lesser Ury in 1883, was subjected to a forced sale by the Nazis in 1940, but was returned to the Lowenthal Family in 1999. The Loewenthals immediately loaned the painting to the Museum of Jewish Heritage to ensure that the public was able to see it and enjoy it.

2009: 16th Century Viennese Bible
In November of 2009, a rare 16th century Viennese bible was returned to representatives of the Jewish community of Vienna.

2010: Portrait of Wally by Egon Schiele
In July 2010, the Museum was the site for restitution of Portrait of Wally, a 1912 oil painting by Austrian artist Egon Schiele, which was the personal property of Lea Bondi Jaray, a Jewish art dealer in Vienna, who fled in 1939 to London, where she died in 1969. The painting subsequently became the subject of court proceedings in New York City from 1998 to 2010, after it was loaned in 1997 to the Museum of Modern Art in New York (MoMA) by the Leopold Museum as part of an exhibition of Schieles from the Leopold Museum’s collection. Following a seizure of the painting from the Museum of Modern Art and subsequent litigations and proceedings, the Leopold Museum agreed to pay the Estate a substantial sum that the painting was to be loaned by the Leopold Museum to this museum. The painting was on view to the public at the Museum from July 29, 2010 through August 18, 2010 before it was placed on display at the Leopold Museum in Vienna. The Museum of Jewish Heritage was chosen to host the painting by the Bondi Jaray estate who wanted a setting that would memorialize the suffering of so many in the Holocaust and the resilience and resolve of those who escaped and/or survived.‖

In October 2013, following a historic restitution settlement regarding the Stadt am Blauen Fluss -Krumau (Town on the Blue River – Krumau), a 1910 watercolor painting by artist Egon Schiele, the family thanked Robert M. Morgenthau for his role in retrieving this rare painting at a restitution settlement press Conference held at the Museum before the painting was offered for auction at Christie’s as part of the Impressionism & Modern Art Evening sale on November 5, 2014. The Museum was chosen by the Grünbaum family to host the conference as a setting that would provide a place for reconciliation and healing, yet appropriately memorialize Franz Friedrich (Fritz) and Elisabeth Grünbaum in the context of the suffering of so many in the Holocaust and the resilience and resolve of those who resisted, escaped or survived. 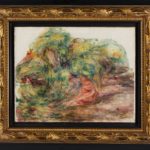 2018: Deux Femmes Dans Un Jardin by Pierre-Auguste Renoir
During World War II, the Nazis created a division known as the Einsatzstab Reichsleiter Rosenberg (the “ERR”) in order to “study” Jewish life and culture as part of the Nazis’ propagandist mission against the Jews. Principally, the ERR confiscated artworks and other cultural holdings of the enemies of the Reich on a massive scale, and meticulously registered and identified those artworks – even photographing them – thereby leaving behind a detailed record of the works that they stole.

In December 1941, during the Nazi occupation of Paris, the ERR seized the Renoir, along with numerous other works, from a bank vault where Alfred Weinberger had stored his collection when he fled Paris at the outset of the war. In the decades that followed, Mr. Weinberger sought to recover his property, registering his claim to the Renoir with the French restitution authorities in 1947 and the German restitution authorities in 1958.

The Renoir resurfaced after the war at an art sale in Johannesburg, South Africa, in 1975. It subsequently found its way to London, where it was sold again in 1977, and then appeared at a sale in Zurich, Switzerland, in 1999. Ultimately, the Renoir found its way to Christie’s Gallery in New York, where it was put up for auction by a private collector in 2013. It was then that Ms. Sulitzer learned of the pending sale and made a claim to the work as part of her grandfather’s collection. Christie’s alerted the FBI, and ultimately the purported owner of the work voluntarily agreed to relinquish its claim. The U.S. Attorney’s Office and the FBI returned the painting to Ms. Sulitzer on September 12, 2018. Ms. Sulitzer loaned the Museum the painting for a short period of display.