By Museum of Jewish Heritage — A Living Memorial to the Holocaust
Thursday, October 22, 2020 • About the Museum
Share
Close Navigation

A new memorial in Battery Park City is located behind the Museum, overlooking the Statue of Liberty and Ellis Island. The memorial is a statue honoring Mother Cabrini, who dedicated her life to serving her community and those less fortunate. Born in Italy, she came to the United States in 1889 on a mission to help Italian immigrants. 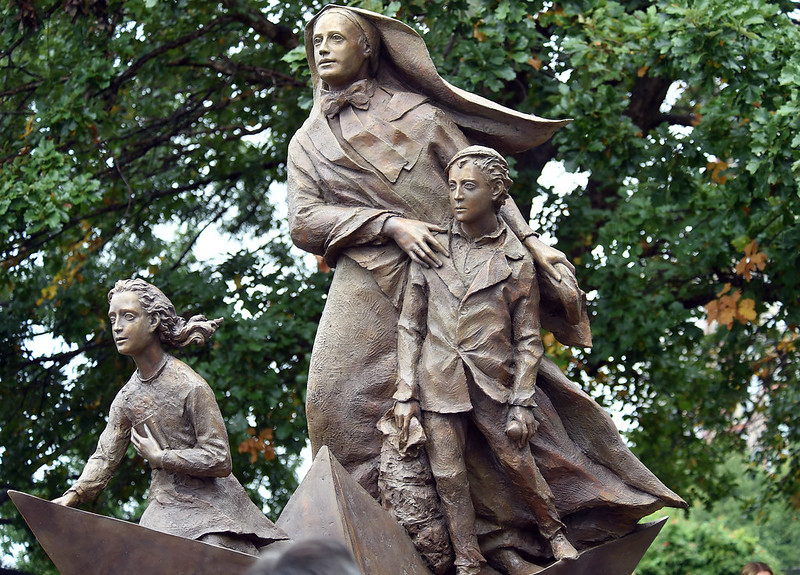 Maria Francesca Cabrini, known as Mother Frances Xavier Cabrini, was an Italian-American who founded many organizations to help the needy. She was born in the small town of Sant’Angelo Lodigiano in Lombardi, Italy, in 1850, the youngest of 13 children. Before migrating to the United States, she took vows and founded the Missionary Sisters of the Sacred Heart, an order that served and schooled orphans.

In New York, she taught at St. Joachim’s parish, the Church of Our Lady of Pompeii, and the Transfiguration Catholic Church – all in Manhattan – as well as St. Rita of Cascia in The Bronx and the Church of St. Stephen in Brooklyn. She also founded the Columbus Hospital, which was eventually named the Cabrini Medical Center in Manhattan. During her lifetime, she founded 67 orphanages, schools and hospitals in New York and around the world.

Mother Cabrini was originally buried in West Park and is now interred at the St. Frances Cabrini Shrine in Manhattan, which she founded. In 1946, nearly 30 years after her death, Mother Cabrini became the first naturalized U.S. citizen to be canonized. She is recognized as the patron saint of immigrants. Several academic institutions, religious buildings and hospitals across New York are named after her.