By Museum of Jewish Heritage — A Living Memorial to the Holocaust
Thursday, August 10, 2017 • About the Museum
Share
Close Navigation 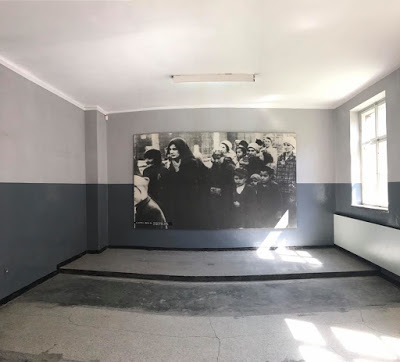 I was born with Achromatopsia, a disorder that among its various vision impairments, is often defined by a lack of color vision. I have only ever seen the world in black and white and in shades of gray due to this. This lack of color is also how we must view most of history before the development and use of colorized media. For anyone who can see color, this impairment in viewing historical photographs and video is understandably unnatural. I have learned that many people see the black and white as a barrier that makes it hard to truly feel the impact of what is being seen. So, is the authenticity of viewing and experiencing history defined by seeing it the way it was originally presented to us or in the way that is most comfortable to our own standards? While this question would probably produce more debate than answers, I can at least offer my own literal view.

Natasha Caudill is currently going into her sophomore year of college at Knox College in Illinois where she is pursuing a major in American studies and a minor in Marketing. She was adopted from Ukraine when she was younger but has grown up in Alabama and Tennessee. Her hobbies include harboring an ever-growing collection and shrine of history books, anything theatre related, film, and watching historical documentaries.

In Search of Authenticity