In Confidence: Diary of Maryla Krinski

By Museum of Jewish Heritage — A Living Memorial to the Holocaust
Thursday, October 25, 2018 • From the Collection   Museum Exhibitions
Share
Close Navigation

From 1943 to 1947, Maryla Krinski kept a diary in the form of poems about her niece Sarah, daughter of Maryla’s brother Joseph and sister-in-law Rachela. Maryla wrote and preserved her diary through her time in the Vilna Ghetto, Kaiserwald concentration camp, Stutthof concentration camp, on a death march, and after liberation.

When the Vilna Ghetto was first established in 1941, Rachela entrusted her daughter Sarah (born in 1939) to Victoria “Vikcia” Rodziewicz, Sarah’s Polish nanny. Victoria pretended that Sarah was her own child. She eventually took her to her village and cared for her throughout the war. During that time, Sarah was baptized Catholic and given the name Irena. In the diary, Maryla sometimes uses the name Irena/Irenka to refer to her niece. 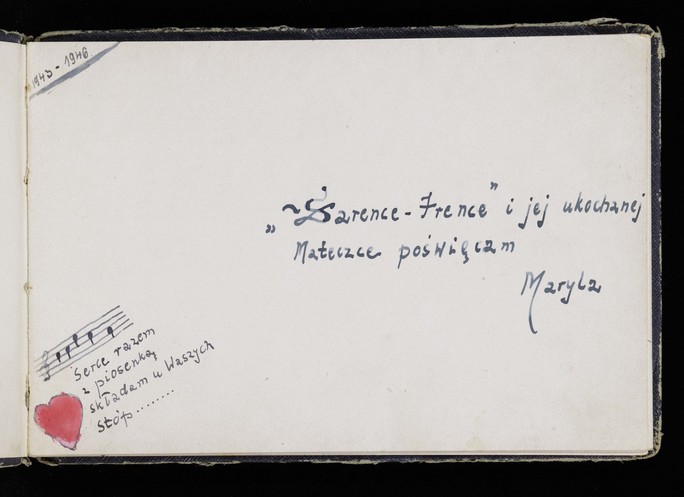 The diary is dedicated:

The heart, together with song, I place at your feet . . .

I dedicate this to “Sarenka-Irenka” and her beloved Mother.

For saving Sarah and reuniting her with her mother after the war, Victoria Rodziewicz was recognized as “Righteous Among the Nations” at Yad Vashem. A tree was planted for her in 1978.

The diary was later donated to the Museum by Sarah’s family Irwin and Alix Wall in memory of Sarah Krinska Wall. It is part of the Museum’s collection highlighted in the new installation In Confidence: Holocaust History Told By Those Who Lived It. Below is a selection in which “Uncle Henryk” (Maryla’s husband) pictures Sarah walking around New York City: 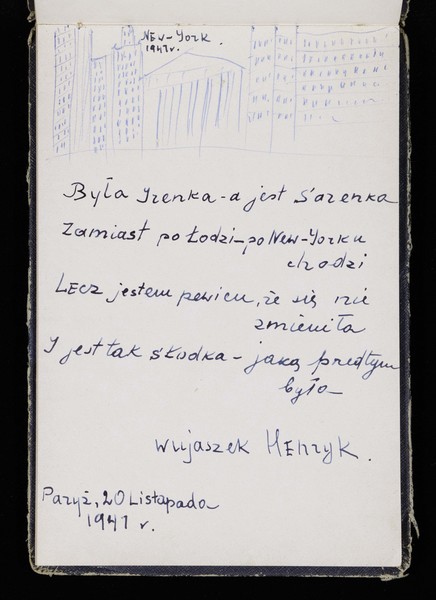 She was Irenka – she is Sarenka

instead of Lodz – she is walking around New York.

But I am sure that she hasn’t changed,

and is as sweet as she was before.

In Confidence: Holocaust History Told By Those Who Lived It is on view at the Museum through January 31, 2019.