Echoes in Ink: A Liberation Day Reading of Short Stories from the Holocaust

On International Holocaust Remembrance Day, the Museum hosted a virtual reading of two Holocaust short stories: “A Wedding in Brownsville” written by Isaac Bashevis Singer and read by Eleanor Reissa, and “The Road of No Return” written by Rachel Korn and read by Mili Avital.

Watch the readings below. 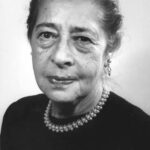 Rachel Häring was born in 1898 in what is now Poland to a wealthy family. When World War I broke out, the family fled to Vienna, but later returned to Poland. She published her first short stories in 1918 in Polish, but by the next year began writing poetry in Yiddish. By the time she married Hersh Korn in her twenties, she was a successful author and poet. During the interwar period, Korn was arrested for being a leftist, although she eventually lost faith in leftist causes. She also gave birth to her daughter Irene during this time. In 1941, Korn went to stay with her daughter in Lvov, Ukraine. While she was there, the Germans invaded, and the two women left for the Soviet Union. However, they did not have enough time to inform the rest of their family, including Hersh, who was murdered during the Holocaust. In 1946, Korn and her daughter returned to Poland and in 1948, they immigrated to Canada. She continued her career in Canada and won numerous awards for her writing. Rachel Korn died in 1982 in Montreal. Learn more here. 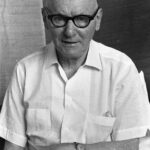 Isaac Bashevis Singer was born in 1904 in Radzymin, Poland. His father was a rabbi, and his mother came from a family of rabbis. They pushed Isaac to become a religious scholar and he began attending rabbinical school in 1921. However, he left in 1923 and began working for a Yiddish literary magazine. Singer then became a journalist in Warsaw and wrote short stories in his spare time. He published his first novel, Satan in Goray, in 1935 and moved to New York the same year. Upon his arrival in the United States, Singer began writing for the Jewish Daily Forward. His popularity grew as a Yiddish writer throughout the 1940s and he developed global fame by the 1970s. Singer won the Nobel Prize for literature in 1978. He died in 1991 in Surfside, Florida. Learn more here.

Special thanks to our distribution partners: