Alias Anna: A True Story of Outwitting the Nazis tells the true story of two young sisters, Zhanna and Frina, and how they survived the Holocaust with the power of music. Written by author Susan Hood with journalist Greg Dawson – who is Zhanna’s son – this nonfiction-novel-in-verse is an evocative and educational read for middle-grade students. 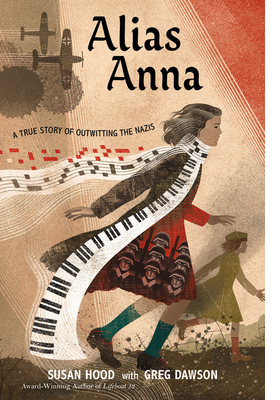 Students of music, Zhanna and Frina were already local celebrities, known as piano prodigies in the small city of Kharkov, Ukraine, when the Germans invaded the Soviet Union in 1941. The family was sent on a death march, but Zhanna and Frina’s father helped them to escape the march, telling Zhanna, “I don’t care what you do. Just live.” The sisters were among very few known survivors of Drobitsky Yar, the mass shooting of over 16,000 Ukrainian Jews that marked the end of that death march.

The book follows the sisters as they flee from town to town using the aliases Anna and Marina. They took refuge in an orphanage, where Zhanna was overheard by passersby as she played on the institution’s shabby piano. Immediately recognized for their talent, the sisters were recruited to a music troupe and compelled to perform nightly for concert halls filled with senior members of the Nazi party. In a terrifying and shocking turn of events, the sisters found themselves in Berlin, hiding in the spotlight just blocks from Hitler’s residence.

This book offers a unique look at the first, and lesser-discussed, phase of the Holocaust, when Nazis used mass shootings rather than gas chambers as their primary method of killing Jews. It is also unique in its focus on Ukraine, where Holocaust literature remains sparse.

In an interview, Greg Dawson said, “Hopefully, Alias Anna can provide new information, not just for kids but for everybody, about the first chapter of the Holocaust.”

Alias Anna is based on over a hundred pages of interviews that Dawson conducted with his mother Zhanna, when he originally researched his book for grownups, Hiding in the Spotlight: A Musical Prodigy’s Story of Survival, 1941-1946. Alias Anna is a retelling of the story appropriate for younger readers as well as adults.

Susan Hood took Dawson’s research and adapted the sisters’ story for a young audience, using poetic forms from reverso to shape poems, and from rhyming poetry to free verse. Hood said, “I chose this format because Zhanna and Frina were piano prodigies; I wanted to use poetry to put the music on the page. It’s also an ideal format for tough subjects like the Holocaust; all the white space gives young readers a buffer, a little breathing room.”

But perhaps what young readers will find most surprising and engaging is the detail of why Zhanna first agreed to recount her experience, which she refused to discuss for many years after the War. She was inspired by her granddaughter, Aimee, who asked for help on a school report about her grandmother’s life experiences.

Recalling this moment, Dawson said, “It was amazing, the power of a grandchild, and the way they have a special bond with grandparents. And the fact that Aimee asked was completely different from anybody else asking. When she asked, it was like it opened the floodgates and opened the door.”

This story, which opens with the appeal from school-age Aimee and follows two young girls in their very early adolescence, is an excellent tool for readers who are young and young at heart to engage with history and marvel at the power of resilience, sisterhood, and music.

By the Grace of the Game: Ernie Grunfeld’s Holocaust History and Basketball Legacy