—Opening Night Event – Screening of
Fleishman Is in Trouble and Conversation with
Author Taffy Brodesser-Akner and A.O. Scott –
On Thursday, December 8— 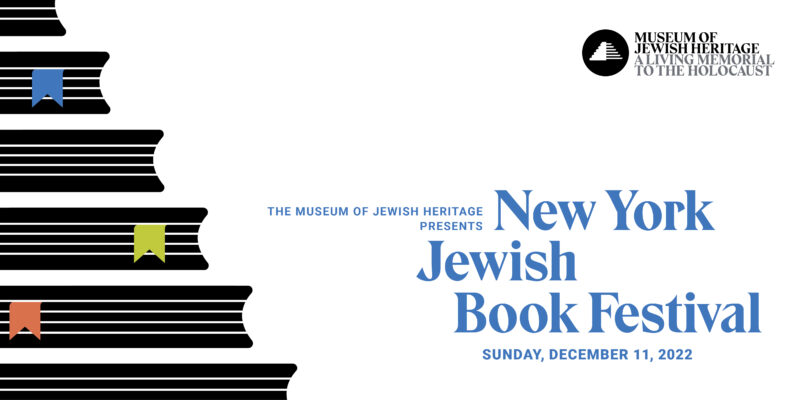 (New York, NY)—The Museum of Jewish Heritage – A Living Memorial to the Holocaust’s inaugural New York Jewish Book Festival is heating up with even more stellar guests – and a kickoff event to screen the new FX series on Hulu, Fleishman Is in Trouble, with author Taffy Brodesser-Akner and New York Times film critic A.O. Scott.

The festival will feature a stellar lineup of talks, panels, author signings, and more on Sunday, December 11, 2022. The daylong event – made possible in part through a community partnership with the Battery Park City Authority – will touch on themes of Jewish heritage, culture and history, modern life and literature, the Holocaust, food and cookbooks, and books and activities for kids and families.

The New York Jewish Book Festival will run from 10:00 AM to 9:00 PM at the Museum at 36 Battery Place in Battery Park City and is free to all with suggested donation. Throughout the day, books will be for sale in the Museum’s Pickman Gift Shop and by individual authors and invited organizations, along with Judaica, just in time for the winter holidays.

“We are proud to present this inaugural event featuring an exciting lineup of authors, panels, and activities that will touch on a range of topics that will appeal to diverse audiences of all ages,” said Jack Kliger, President and Chief Executive Officer of the Museum of Jewish Heritage. “We fully expect this to become an annual tradition, one that highlights our commitment to celebrate Jewish life.”

“Literature shapes us as a people, our history, our faith, our culture, and our future,” said Bruce Ratner, Chair of the Board at the Museum of Jewish Heritage. “The New York Jewish Book Festival will be an opportunity to both celebrate and educate about the Jewish experience.”

Throughout the Museum’s theatre, classrooms, and events hall, panels and programs will be presented in partnership with Lilith Magazine, Association of Jewish Libraries, the Yiddish Book Center, New York Jewish Week, Jewish Currents, Moment Magazine, the Forward, and Tablet.

Among the new additions to the lineup are book-signings with:

Among the program highlights throughout the day are:

For children and families, we will be joined by PJ Library, Kalaniot Books, Querido Levine, and authors of books for children in our Kid’s Corner, including The Very Best Sukkah: A Story from Uganda with Soshana Nambi and an interactive reading of Mendel’s Hanukkah Mess Up with Chana Stiefel and Larry Stiefel. Susan Hood and Greg Dawson will present Alias Anna: How Two Ukrainian Teens Outwitted the Nazis, and Suzette Sheft will be in conversation about her book, Running for Shelter.

For the full schedule and to reserve your spot at the Book Festival and for the seven keynote events, visit http://nyjewishbookfestival.org.

The New York Jewish Book Festival is made possible in part through a community partnership with the Battery Park City Authority.

Throughout the day, Festival attendees can nosh at the acclaimed LOX Café, and visit the Museum’s inspiring and moving exhibitions: Andy Goldsworthy’s Garden of Stones, The Holocaust: What Hate Can Do, and Survivors: Faces of Life After the Holocaust. Photographs by Martin Schoeller.

The Museum’s main exhibition, The Holocaust: What Hate Can Do is an expansive and timely presentation of Holocaust history told through personal stories, objects, photos, and film – many on view for the first time. The 12,000-square-foot exhibition features over 750 original objects and survivor testimonies from the Museum’s collection. The Holocaust: What Hate Can Do is a representation of this global story through a local lens, rooted in the objects donated by survivors and their families, many of whom settled in New York and nearby places.

Also now on view is Survivors: Faces of Life After the Holocaust. Photographs by Martin Schoeller, the inaugural exhibition in the Rita Lowenstein Gallery. This exhibition, originated by Martin Schoeller and Yad Vashem, features 75 photographs created to mark the 75th anniversary of the Liberation of Auschwitz. Schoeller photographed these Holocaust survivors and created a short film documenting the process. The exhibition includes the entire body of work including the film, bios, and quotes from the sitters.

*The day of the Jewish Book Festival, the Museum will be open and free to all visitors from 10 AM to 9 PM.

Celebrating its 25th anniversary in 2022, the Museum of Jewish Heritage – A Living Memorial to the Holocaust is New York’s contribution to the global responsibility to always remember. The Museum is committed to the crucial mission of educating diverse visitors about Jewish life before, during, and after the Holocaust. The third-largest Holocaust museum in the world and the second-largest in North America, the Museum of Jewish Heritage anchors the southernmost tip of Manhattan, completing the cultural and educational landscape it shares with the Statue of Liberty and Ellis Island.

The Museum’s current offerings include The Holocaust: What Hate Can Do, a major new exhibition offering a timely and expansive presentation of Holocaust history, now on view in the main galleries. Also on view is Survivors: Faces of Life After the Holocaust, featuring photographer Martin Schoeller’s portraits of Holocaust survivors, on view through June 18, 2023.

Each year, the Museum presents over 60 public programs, connecting our community in person and virtually through lectures, book talks, concerts, and more. For more info visit: mjhnyc.org/events.