By Museum of Jewish Heritage — A Living Memorial to the Holocaust
Wednesday, February 20, 2019 • About the Museum
Share
Close Navigation

Recently, staff members of the Museum of Jewish Heritage – A Living Memorial to the Holocaust toured the 9/11 Memorial and Museum with some of its exhibitions team. Three MJH employees wrote about their perceptions after the tour, how design influences museum experience, and the importance of memorials.

Olivia Maccioni, Outreach & Visitor Experience Coordinator
After my visit to the 9/11 Memorial & Museum, I began to think further about our Museum’s name as a “Living Memorial to the Holocaust.” While this name is at its core a clear link to the Museum’s focus on survivor testimony and sharing a history as told by those who lived it, I began to realize that there is also something to be said for the work of the Museum’s design itself as a locus of living memory. For me, a poignant site of the power of affective design at our Museum is Andy Goldsworthy’s Garden of Stones: 18 massive stone boulders with dwarf chestnut oaks growing out of their centers. According to Goldsworthy, the Garden is as a metaphor for the tenacity and fragility of life and reflects the tension between the ephemeral and the timeless, between young and old, and between the unyielding and the pliable. He notes that as the trees mature, each will grow to become a part of the stone, its trunk widening and fusing to the base. The 18 saplings were planted by Holocaust survivors and their families—an event that acts as a direct institution of living memory. What I find most powerful in both this event and Goldsworthy’s description is the Garden’s emphasis on a fusion of past and future, an ode to the longing of individuals of our past who are able to live on in our current moment.

Susan Woodland, Senior Manager for Collections & Research
My thoughts after visiting the 9/11 Museum are complex. Being able to tour it as a museum professional, with 9/11 Museum professional staff and MJH colleagues, was a unique opportunity. The differences and similarities between our museums were striking. Devastatingly sad topics, themes, and images; personal memorials to specific victims of the Holocaust and of the three 9/11 sites, the emphasis on remembering and learning from the past.

I remember very clearly one of the young victim’s inline skates on display, connecting her with a very specific place and time that is already receding into the past. Perhaps in that way the 9/11 Museum is also similar to MJH, where our visitors are several generations removed from the events of the Holocaust.

Ari Goldstein, Manager of Special Projects
Since visiting the 9/11 Memorial and Museum with my colleagues, one image has returned to mind again and again: 2,977 individual portraits, emblazoned on the walls of the Museum’s Memorial Exhibition. Organized in rows that stretch from floor to ceiling, the portraits serve both to humanize the individual victims of the 9/11 attacks and also to illustrate the colossal scale of our collective loss on that day. Hung side by side, they are a beautiful and devastating tribute to a group of people who lived separate lives but were brought together in their deaths.

The Memorial Exhibition has certainly remained in my mind because of its emotional power, but also because of its aesthetic and symbolic similarity to a piece of our own memorial at the Museum of Jewish Heritage – A Living Memorial to the Holocaust: the Klarsfeld pillars. The Klarsfeld pillars, which were on display for many years in the Museum’s Core Exhibition, featured 2,000 photographs of Jewish men, women, and children who were deported from France, the vast majority sent to Auschwitz-Birkenau. 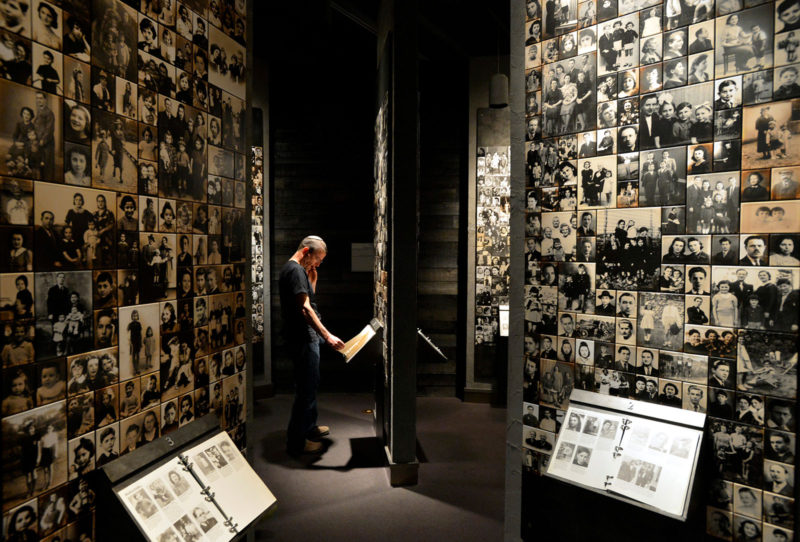 In searching for the stories and photographs of individuals, we assert their humanity as individuals –denying the Nazis and other perpetrators of mass crimes the opportunity to dehumanize victims in death as they did in life. The images on our pillars, which were gathered by the Association of Sons and Daughters of Jews Deported from France, embodied compounded acts of memorialization: by those who found and hung them, as well as by each museum visitor who has stopped and looked at them.

Both memorials are ultimately beautiful manifestations of the quote from Deuteronomy that opens our Core Exhibition: “Remember, never forget.” As we consider the future of Holocaust memory and the changing ways we will have to tell our story, it is particularly valuable to understand how other memorials choose to live out that quote and its ever-important lesson.