By Museum of Jewish Heritage — A Living Memorial to the Holocaust
Tuesday, December 29, 2020 • About the Museum   Jewish Life
Share
Close Navigation

The Museum community mourns the loss of Marian Soss in November. She and her husband led extraordinary lives centered around family and shaped by World War II. The story of their life together follows.

Coming of age during the Great Depression and growing up to serve their country and their communities in more ways than one, Marian Harriet (Jaffe) Soss (October 8, 1924 – November 16, 2020) and Dr. Thomas Leonard Soss (October 22, 1917 – March 28, 2006) were members of the Greatest Generation. They married on August 11, 1946 and had three children: Bill, Connie, and Deborah. Marian and Tom led extraordinary lives both before and after their nuptials, but to their children, grandchildren, and great-grandchildren, Marian and Tom were Mom and Dad, Grammy and Gramps.

Marian was known for her beautiful voice and her extensive collection of cross-stitch samplers and Tom was a beloved physician in their home city of Burlingame, California. The two were married for 59 years in which they had three children and shared countless stories with one another and with the communities in which they traveled.

Even in their everyday lives, Marian and Tom were pillars of their communities in terms of social activism and support. As long-time members of their local synagogue, Peninsula Temple Sholom, and countless other volunteer organizations, their dedication to public service was unmatched.

Before their marriage, Marian and Tom both had formative life experiences as teens and young adults that shaped who they would become as they grew together

As a high school student in Washington State, Marian ensured that her Japanese classmates being held in internment camps received their high school diplomas from Garfield High School in 1942. Then following her time at University of Washington, where she led the war bond drive, Marian joined a USO troop and performed for servicemen and veterans. During her time in this USO troop, she was able to meet her brother’s brother-in-law, Tom, in 1946. 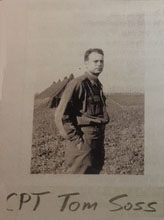 Tom was stationed in Europe for three years as an army doctor. He was part of a battalion called the Yankee Division. In May of 1945, photos that Tom took would end up proving that his battalion was among the first to liberate the Mauthausen concentration camp. Because of these photos, the Yankee Division was recognized as a Liberator Division by the United States Holocaust Museum and Memorial in Washington D.C. in 2003 and the battalion’s flag is now on display.

Coming of age during WWII is destined to shape someone as an individual. Whether they were a survivor, an activist, or a liberator, the lives of the Greatest Generation and those they raised were forever changed because of the impact of WWII.

Marian’s and Tom’s roles in their communities, both local and expanded, were treasured and will be remembered for years to come. In addition, their legacies continue within their family. Their children, grandchildren, great-grandchildren, and countless cousins and nieces and nephews, will not only tell stories of Marian’s beautiful singing voice or her impeccable handwriting, or Tom’s passion for photography and golf, but of their contributions to their community, which will also live on through the family’s activities as well.