By Museum of Jewish Heritage — A Living Memorial to the Holocaust
Thursday, February 27, 2020 • From the Collection   Museum Exhibitions
Share
Close Navigation

Historical clothing has fascinated me since I was very young. As a five year old I insisted on wearing at least three petticoats to school and cut up my tights to make them more like 19th century stockings. Historically textiles have been highly prized, kept, patched, mended, cut and recut until they are unrecognizable. Textiles can be used to tell the story of the Holocaust as well, and not only through prisoner uniforms and yellow stars patched onto coats and dresses. Shoes are the piece of clothing perhaps most associated with the Holocaust, but each garment has a life of its own and a story to tell.

So perhaps it is not so odd that the first thing that struck me when I saw Chaya Porus’s blouse was “It looks like there used to be a pocket there.” The slight indentation of the fabric in a perfect square appears to show that a pocket once covered the blouse’s left breast.

The blouse was made by a young woman named Chaya Porus Palevsky, who hand-stitched and embroidered the blouse, and gave it to her sister Rachel, a nurse in the Švenčionys ghetto in Lithuania. Rachel was wearing the blouse when she was murdered in Ponar (Ponary), a forest that became the grave of 100,000 people, most of whom were Jews like Rachel.

Before she was murdered Rachel was forced to take off the blouse. A woman who was forced to sort the clothing of the recently murdered recognized the bright and distinctive embroidery in the pile of clothing. She took the blouse, risking her life, and returned it to Chaya along with the news of her sister’s murder.

Chaya was a member a partisan group called Nakam, the Hebrew word for revenge. She nursed fellow partisans, and participated in raids to capture weapons, and missions to blow up power stations and derail trains. As Chaya fought, she wore the blouse in memory of her sister, carefully stitching and repairing it when it showed signs of wear.

The blouse itself is made of a simple light fabric, the kind that had been used to make blouses and underclothes for centuries, but the embroidery is deceptively modern. Despite its peasant styling, such a blouse would have been considered quite stylish in the 1940s. 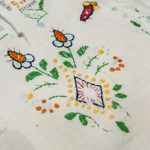 The beautiful hand worked embroidery was not only a mark of love, but was an act of resistance in and of itself. Embroidery is something that takes time, skill, and resources, yet Chaya was making this piece in a ghetto. One would have expected clothing to be utilitarian – which the basic construction of the blouse is; it is cut from simple shapes with gathers only at the neckline and shoulder to save fabric. The construction was likely not entirely different from a shift that could have been worn two or three hundred years earlier. But then it is colored with bright, cheerful flowers: red and green and blue. Small red cross-stitches decorate a pretty, gathered neckline. Chaya gave her sister something that was beautiful while Rachel nursed sick and dying people. It was a way of retaining humanity, of continuing to show the bonds of family.

Dress historian Lucy Adlington wrote in her book Stitches in Time that shoes, and by extension all clothing, are a reflection of the people who once wore them. Clothing can act as a last tangible memory of the dead. For a time at least, it carries their smell and their warmth, maybe it has even formed to shape of their body. Chaya made her sister this blouse as an act of love, and wore it as an act of memory. We keep that memory alive today at the Museum: the blouse, and its story, are on view in the exhibition Auschwitz: Not Long Ago, Not Far Away.

More photos of the blouse and some of the patching and repair stitches are in the slideshow below.

Hand embroidered blouse belonging to Rachel and then Chaya Porus as she escaped from the Vilna ghetto with her partisan group. Blouse, 1943-1944. Gift of Simon and Chaya Palevsky. 2000.A.91.
Side view of the blouse documenting its condition before being displayed in the "Auschwitz. Not long ago. Not far away." exhibition
Stitching and patching
Closer view of the patching
Fraying and stitching detail