By Museum of Jewish Heritage — A Living Memorial to the Holocaust
Thursday, September 15, 2016 • About the Museum
Share
Close Navigation 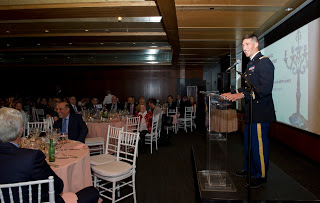 In June 2016, Captain Benjamin Dratch spoke at the annual AJC dinner. This is the text of his speech:

Ladies and gentleman, thank you very much for attending the Auschwitz Jewish Center Foundation Dinner and for supporting the American Service Academies Program. I would especially like to thank Shiri Sandler, the US Director of the AJC, for the opportunity to speak to all of you tonight.

Seven years ago, I attended this same function as a very different person. I was 19 years old, had just completed my freshman year at the United States Military Academy, and, despite a challenging first year at West Point, I still had a belief that I was almost invincible. My experience during the American Service Academies Program profoundly changed my worldview.

I am Jewish and my grandmother escaped Germany in 1936. My first visit to the United States Holocaust Memorial Museum was when I was 15, and my grandmother walked me through the museum telling me how her life had changed as the Nazis came to power. She told me how her old friends started avoiding her and how being Jewish became increasingly stigmatized. If anyone in my generation was in a position to understand the plight of the Jews in the Holocaust, it was me. But yet, I did not. I thought I empathized with their struggle but I really could not imagine losing my life in a death camp. Somehow, I always believed that it would have been different for me; I would have managed to escape. I now see the error of the arrogance borne from my inexperience. As an able-bodied, white, middle-class, American male, it was incredibly difficult for me to imagine the powerlessness of those being held by the Nazis. There is something immeasurably moving about seeing first-hand the thick brick walls, tall watch towers, and rows of barbed wire surrounding the Auschwitz Death Camp. I finally realized, if I had lived in Germany during the early 1940s, I too would have likely lost my life in a place like Auschwitz. Just as I feel totally integrated into American society today, countless Jews felt connected to their respective cultures in Europe and were unable to imagine the fate that awaited them at the hands of the Nazis. It is easy to grow comfortable believing the world is destined to become increasingly peaceful and humane, but history will only repeat itself if we do not remain forever vigilant and combat hateful ideologies before they gain popular support.

So, you might be wondering, the American Services Academies Program teaches empathy to future military officers but how does that translate into action? This is where I believe the program is truly exceptional. During our visits to different museums and while listening to a variety of speakers, we learned about the many Righteous Gentiles who risked their own lives to help the oppressed. Hearing these stories, one thing in particular always stood out to me: all these heroes viewed their own efforts in relatively unheroic terms. They simply stated that helping others was the right thing to do, so they helped. And they didn’t see themselves as having done any single particularly courageous act, they just lived their daily lives in a moral way and when presented with an ethical challenge, like whether or not to help hide a family of Jews fleeing Nazi occupied territories, they acted in accordance with their deeply held values.

In Exodus 23:9, the Torah states that “you know the feelings of a stranger, for you were strangers in the land of Israel.” I have considered this quote often since first traveling to Auschwitz. During my first deployment to Afghanistan, I was initially in charge of many Afghan-born linguists and locally contracted workers who helped on the base. While technically I was in their country, the Afghans were definitely “strangers” who had limited power when working on an American Forward Operating Base. It was educational opportunities like the American Service Academies Program that prepared me to be able to relate and empathize with individuals from such a different background. Talking to many of the Afghans I worked alongside, I was always struck by the common humanity we shared. Just like the average American, the vast majority of Afghans dream of living in a country where their families are safe and they are able earn a living wage. My duties during that first deployment to Afghanistan, and even in my subsequent deployment to Iraq, were nothing that remarkable but I took a great deal of pride in them. I figured it was the little actions that mattered: attempting to do the right thing day-in-and-day-out. That is the way so many Righteous Gentiles approached life and is clearly the way many of you, here tonight, live your lives. All of you could be somewhere else, but you are here, supporting this incredible organization.

This program has given me, and so many other officers, a priceless learning experience that we will never forget. The world is a dangerous place, and the American Military will continue to play an important stabilizing role for decades to come. Your support of the American Service Academies Program helps ensure that future leaders, like the cadets seated here tonight, are prepared to take on the challenges that lay ahead. Thank you so much for your dedicated support of this program and our country.

My Contribution to Never Again