By Museum of Jewish Heritage — A Living Memorial to the Holocaust
Thursday, December 14, 2017 • About the Museum
Share
Close Navigation 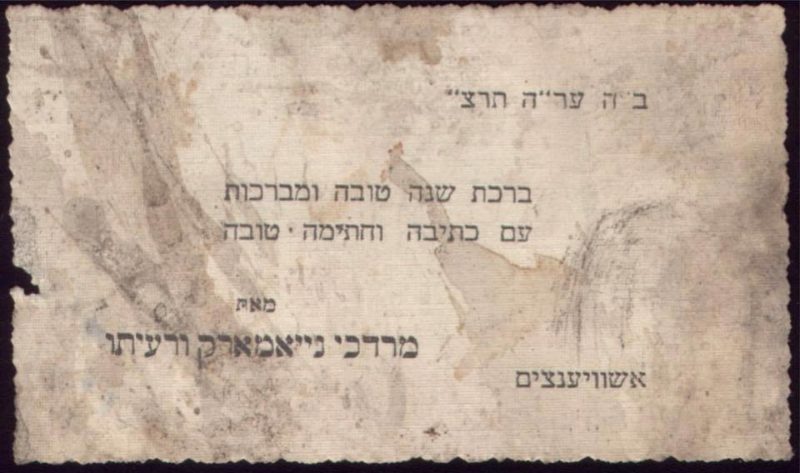 This greeting card from 1929 sends blessings for Rosh Hashanah and Yom Kippur from Mordechai Neumark and his wife in Oświęcim. The family owned a paint store at 1 Kościelna Street. Learn more about the AJC’s artifacts and permanent exhibition here.

The Auschwitz Jewish Center (AJC) in Oświęcim, operated by the Museum of Jewish Heritage — A Living Memorial to the Holocaust, is just two miles from the Auschwitz–Birkenau death camps. The only Jewish presence in the vicinity of Auschwitz, the Center opened its doors in September 2000 so that people from around the world could gather to learn, pray, and remember the victims of the Holocaust.

The Auschwitz Jewish Center, a proud member of the Museum of Jewish Heritage — A Living Memorial to the Holocaust family, is comprised of three buildings: the Chevra Lomdei Mishnayot Synagogue; the adjoining Kornreich House, which once housed a Jewish family and today houses a Jewish Museum and educational programs; and the 100-year-old Kluger Family House, which belonged to the last Jewish resident of Oświęcim, Szymon Kluger, after WWII.

Before Auschwitz became the ultimate symbol of the Holocaust, it was an ordinary Polish town known as Oświęcim, where Jews made their home from the early 16th century until the Holocaust, when most of them were murdered. In the pre-war years, the majority of Oświęcim’s citizens were Jewish, and for generations they raised families here and contributed to a richly textured culture. The Holocaust suddenly ended the vibrant Jewish life of the town. Visitors to the Auschwitz Jewish Center’s Jewish Museum can connect with Oświęcim’s pre-war Jewish life through a visit to the Core Exhibition which features photographs, documents, archeological artifacts, and survivor testimony.

A perspective from Bulgaria