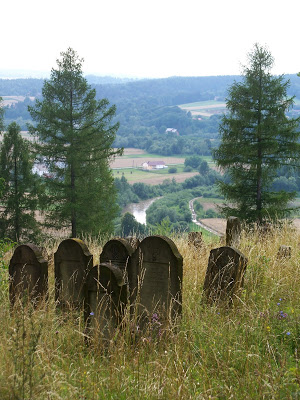 In 1939, the town of Bobowa had a population of approximately 700. During the Holocaust, it served as a concentration point for Jews from smaller villages in the surrounding countryside, including 60 Jews from Oświęcim. During the course of the war, many Jews were sent to work in labor camps in the area. The ghetto was liquidated on August 14, 1942, and the remaining Jewish inhabitants of Bobowa were murdered in a nearby forest. I took this photograph at the Jewish cemetery overlooking the town. There was something unsettling about the combination of the picturesque location, the intact gravestones, and the overgrown condition of the cemetery. Like those of many Jewish sites in Poland, this photograph evokes both the sense of loss of Jewish life and culture due to the Holocaust and physical reminders of the communities that remain.

Dr. Waitman Wade Beorn is the Director of the Virginia Holocaust Museum in Richmond, VA. He received his PhD in History from the University of North Carolina- Chapel Hill in 2011 and is a 2000 graduate of the United States Military Academy at West Point. He is the recipient of numerous fellowships and scholarships, and has published several books. Recently he was honored with the Thomas J. Wilson Memorial Prize for best first book from Harvard Press. He is currently preparing a major project on the Janowska concentration camp outside of Lviv, Ukraine.