By Museum of Jewish Heritage — A Living Memorial to the Holocaust
Monday, December 26, 2016 • About the Museum
Share
Close Navigation 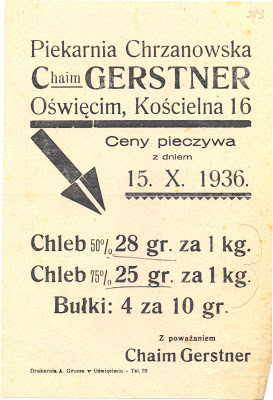 This advertisement from the Chrzanów Bakery lists prices of bread for sale on October 15, 1936. Christian and Jewish residents of Oświęcim bought fresh bread at the Chrzanowska Bakery, which was owned by Chaim Gerstner. Chaim and Miriam lived nearby at 2 Spadzista Street with their children Rachel, Mina, and Yaakov.

In 1941, the Gerstners were deported to the Chrzanów ghetto. Chaim Gerstner was hanged publicly with his father Israel, brother Shimshon, and four other Jews on April 29, 1942 in the ghetto. His oldest daughter, Rachel, was the only family member to survive. She immigrated to Palestine in 1947.

This object is part of the collection of the State Archive in Katowice branch in Oświęcim.