Looking for some new books to add to your reading list? Consider one or all of the following. And if you’re local to New York city, we hope to see you here for our related book events this month. 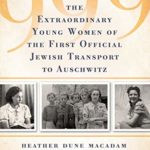 999: The Extraordinary Young Women of the First Official Jewish Transport to Auschwitz by Heather Dune Macadam (co-author, Rena’s Promise) chronicles the tale of nearly 1,000 young Jewish women from Slovakia who were deceived into boarding a train for Auschwitz.

On March 25, 1942, nearly a thousand young, unmarried Jewish women boarded a train in Poprad, Slovakia. Filled with a sense of adventure and national pride, they left their parents’ homes wearing their best clothes and confidently waving good-bye. Believing they were going to work in a factory for a few months, they were eager to report for government service. Instead, the young women—many of them teenagers—were sent to Auschwitz. Their government paid 500 Reich Marks (about $200) apiece for the Nazis to take them as slave labor. Of those 999 innocent deportees, only a few would survive.

Painstakingly researched, the book illuminates the women’s day-to-day lives and struggle for survival in the death camp. Join the author in conversation with Dr. Lori Weintrob (Director, Wagner College Holocaust Center) and descendants of the 999 at the Museum’s book launch on Wednesday, January 8 at 7 PM. 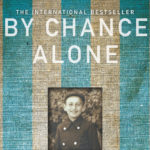 By Chance Alone by Max Eisen is an award-winning, internationally bestselling Holocaust memoir in the tradition of Elie Wiesel’s Night and Primo Levi’s Survival in Auschwitz. In the spring of 1944, gendarmes forcibly removed Tibor “Max” Eisen and his family from their home, brought them to a brickyard and eventually loaded them onto crowded cattle cars bound for Auschwitz-Birkenau. At fifteen years of age, Eisen survived the selection process and was inducted into the camp as a slave laborer. More than seventy years after the Nazi camps were liberated by the Allies, By Chance Alone details Eisen’s story of survival.

Celebrating the launch of the book’s American edition, Max Eisen will speak at the Museum on January 22 at 7 PM, along with Phyllis Greenberg Heideman, President, International March of the Living; Eli Rubenstein, National Director, March of the Living Canada, and Cantor Aviva Rasky. 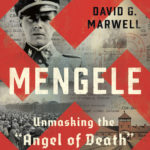 Former Museum of Jewish Heritage Director David G. Marwell’s book Mengele: Unmasking the “Angel of Death” describes the notorious war criminal’s training and early promise as a scientist; his wartime service in combat and at Auschwitz; and his postwar refuge in Germany and South America. It chronicles the international search for Mengele in 1985 that ended in a cemetery in Sao Paulo, Brazil, and the dogged forensic investigation that eventually confirmed his death.

Deborah Lipstadt, author of Antisemitism Here and Now and Dorot Professor of Modern Jewish History and Holocaust Studies, Emory University, writes, “David Marwell’s Mengele is a fascinating historical work. How did Dr. Mengele come to epitomize the many medical atrocities committed by trained doctors at Auschwitz? How did he escape? How was he (almost) found? But it is far more than just exceptionally solid scholarship. It is also a thriller and a first-rate detective story written by someone who was part of the team that had to unravel this mystery.”

David Marwell will be at the Museum to discuss his book with Thorsten Wagner, Executive Director, Fellowships at Auschwitz for the Study of Professional Ethics (FASPE), on Wednesday, January 29 at 7 PM.