By Museum of Jewish Heritage — A Living Memorial to the Holocaust
Wednesday, December 9, 2015 • About the Museum
Share
Close Navigation 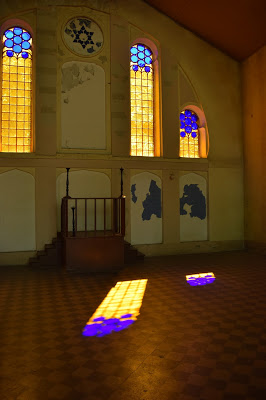 The New Łódź Jewish Cemetery, established in 1892, is the largest Jewish Cemetery in Europe. More than 180,000 graves and 65,000 tombstones, ohels (structures built over graves), and mausoleums occupy the cemetery located on Zmienna Street, south of the Radogoszcz train station.

During the Nazi occupation, the cemetery became part of the eastern section of the enclosed ghetto. Between 1940 and 1944, approximately 43,000 burials took place in a part of the cemetery that became known as the “Pole Gettowe” or Ghetto Field. The cemetery was also the site of many mass executions of Jews, Roma, and non-Jewish Poles.

Upon entering the Beit Tahara (funeral home) within the cemetery, I was instantly met with a sense of warmth; not temperature, but comfort. The angles, colors, symbols, textures of this humble room illustrate its importance in the preparation for a Jewish burial. There was also a silence to the room that conveyed its purity, its strength.

After a few moments I began to realize just how many victims of the Holocaust that were not granted this ritual carried out with dignity and respect. The traditional washing (rechitzah), ritual purification (taharah), and dressing (halbashah) of the deceased, the prayers and readings from Torah, The Law of Onen, and the practice of Shemira, all of which were lost.

Todd Hennessy is an educator with The Colorado Holocaust Educators in Denver, CO. For fifteen years Todd taught middle and high school social studies for two public school districts in Colorado. He currently teaches the Holocaust curriculum for the Temple Sinai Religious School in Denver, and is a United States Holocaust Memorial Museum Regional Education Corps Member and Museum Teacher Fellow. When Todd is not teaching, he is a career firefighter / EMT with the South Metro Rescue Authority in Centennial, CO.

My Contribution to Never Again

In the Shadow of Tragedy: Life After Columbine